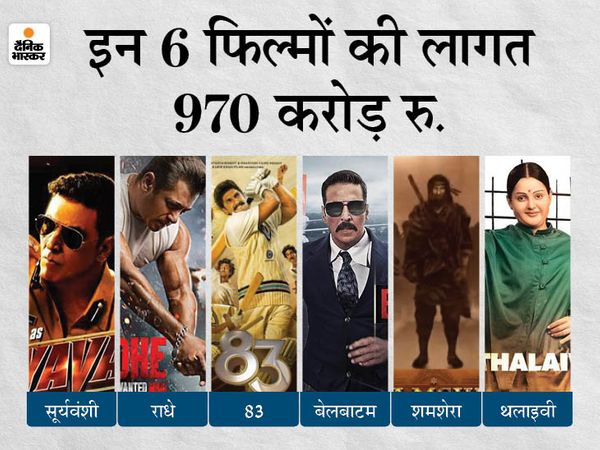 The second wave of Corona is proving more dangerous for the film industry. Over the next few months, Bollywood, which has suffered a loss of nearly Rs 2,000 crore in the last one year, is at a stake of over Rs 1100 crore. There are 11 films, which are ready and are waiting to get on the big screen.

Due to the increasing scope of lockdown and night curfew in the country, the release dates of films are being extended again. In such a situation, far from compensating for the loss of the previous year, this year’s earnings are also seen in difficulty.

From November 2020 to March 2021, some films came on the big screen, but seeing their fate, Bollywood has also been shocked. Barring just one film, ‘Roohi’, no one else managed to make up for its cost. The worst happened to Parineeti Chopra and Arjun Kapoor’s film Sandeep and Pinki absconding. Which was made at a cost of about 25 crores and could earn only 35 lakhs.

3000 crore loss in 6 months
Trade analyst Girish Wankhede told that in 2021, more than 50 big films were expected to be released in Hindi. These films were to be released on ten thousand screens. Which had the potential to touch the earnings figure of at least 5000 crores, but the films released in the first quarter of 2021 were a flop at the box office. In the second quarter, this new wave of Corona has knocked, which if reduced further, even then by the end of half a year, Bollywood will have a loss of around 3 thousand crores. 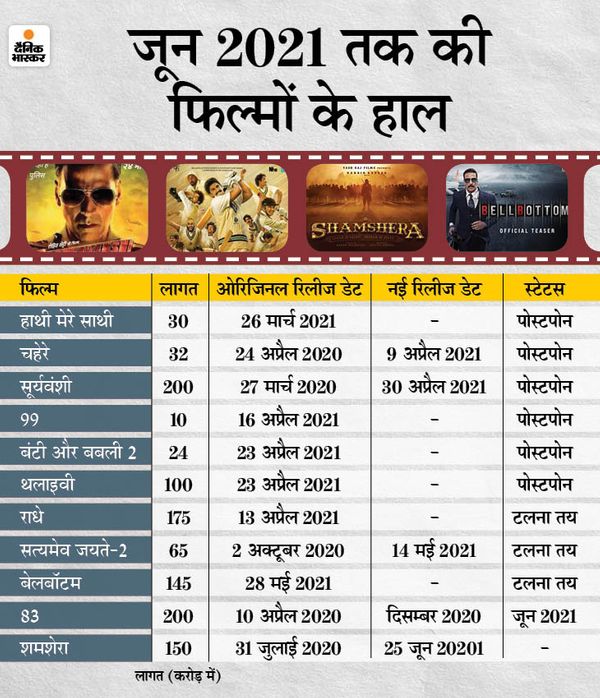 Release calendar impaired
The release of films has begun to be postponed due to increasing cases of corona. Release of ‘Faces’, ‘Suryavanshi’ and ‘Thalaivi’ and ‘Bunty Babli-2’ in April, ‘Radhey’, ‘Satyamev Jayate-2’, ‘Bel Batam’ in May and ’83’ and ‘Shamshera’ in June. The date was almost fixed, but they have been postponed until the conditions become normal.

Ajay turned to OTT
Trade experts said that Akshay Kumar first released his film ‘Lakshmi’ on Hot-Star last year. Its budget was 135 crores. Given the threat of Corona, the film ‘Bhuj: The Pride India’ which is being delayed is made at a cost of 135 crores. The makers have also decided to release the Ajay Devgan starrer film on Hotstar. Hotstar had bought two more films with Bhuj: The Pride India through Ajay Devgan. ‘Khuda Hoffiz’ and ‘The Big Bull’. Both films have been released on Hotstar. ‘The Big Bull’ film had a budget of 32.50 crores, ‘Khuda Hoffiz’ had a budget of 28 crores. Trend pundits are speculating that Hot Star is currently busy showing the IPL live. As soon as the IPL is over, the film ‘Bhuj’ will be released in June. It is also believed that the promotion of this film will begin in May 2021.

OTT not for big budget
On the other hand Salman Khan, John Abraham and Reliance Entertainment are saying that he will not release his film on OTT. Akshay Kumar starrer film ‘Belbatam’ is scheduled to release on May 28. It is believed that these films will also not be given to Akshay Kumar OTT. Movies and web series are continuously coming on the OTT platform, but another business model works in them. OTT companies do not offer budgets as big as theatrical releases for films. Therefore, the producers are reluctant to release very big budget films like Suryavanshi and 83 on the OTT platform as they pay them a little more than the cost. The budget of 200-300 crores cannot be expected from them, so theatrical release is the last way left. 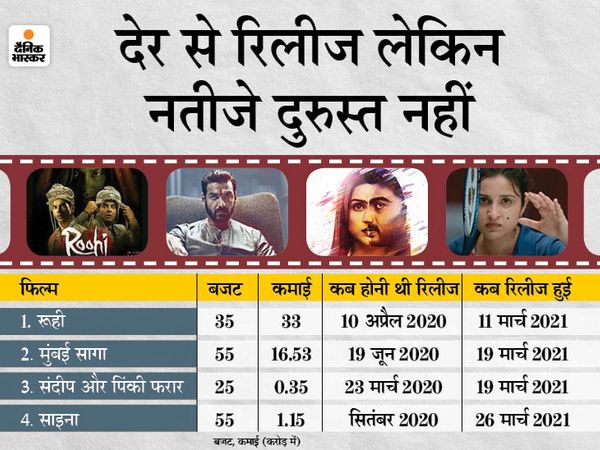 Many big films were flopped

In the Corona era, some films were released by March 2021. Such as Rajkummar Rao-Janhvi Kapuri’s ‘Ruhi’, Kiara Advani’s ‘Indu Ki Jawani’, Parineeti Chopra-Arjun Kapoor’s ‘Sandeep Aur Pinky absconding’, Parineeti’s ‘Saina’, John Abraham and Emraan Hashmi’s ‘Mumbai Saga’ Apart from ‘small’ big films like ‘Flight’, ‘Koi Jaane Na’. Even if the estimated budget of these films was taken to be around 300 million, the makers expected a business of 1000 crore rupees, but most of these films could not even extract the cost.

There is no hope for three months
Trend analysts and editor of Complete Cinema magazine Atul Mohan said that the situation has become serious. In January-February, the industry felt that things were getting better, then the films were announced. Cinemas opened. Sub control was to a large extent. Radhe and Suryavanshi movie date was announced. All were running with a positive approach that would be fine now. We were also planning that suddenly in March, the situation happened again like last year. State wise all started closing. Cinemas started closing. In South too, it was announced to run the film with an audience of 50%. The rapid increase in the number of corona patients, it seems that in the next three months, there is no hope. There is a huge loss for the industry and everyone. The films which were stalled last year, when released, fell on their faces. There are 11 films ready for release right now. Millions of filmmakers and people associated with it are being harmed. Built at a cost of approximately 135 crores, Bhuj was earlier to be released in theaters, but will now release it on Hotstar.

All be as fast as before
Rumi Jaffrey, director of the film Faces, told in a special conversation with ‘eBioPic’ that our film was completely ready. To be released on 9 April. But in view of Corona’s growing case and new guidelines, the release of the face is currently postponed till the next notice. Ramadan is starting, in such a way that Allah should, everyone gets relief from Corona soon. May life be restored again as before. This is my blessing.

When will the danger cloud
The answer to this question is not even with the big Bollywood experts, as until the corona is completely under control, people will not have the confidence to go out with the family, entertainment will have to be done sitting indoors. The biggest loss is being to the multiplex owners as the estimated cost of running a multiplex is Rs 1 crore per month. The crisis of employment has been going on there for a long time.

Don’t know when theaters will open
The concern of the makers is also that the way Corona has started spreading its footing again in the last one month, governments seem helpless and there is no way other than lockdown. In such a situation, when the theaters will open again and will come into operation 100%, it is also likely to take a long time.