Corona continues to wreak havoc in the entire country as well as in the film industry. Sonu Sood, who has become the Messiah by constantly helping the Kovid affected people, has also come in the grip of the second wave. The 47-year-old actor released an official statement on social media. In it, he wrote that they had become quarantined at home. However, there is nothing to worry about. 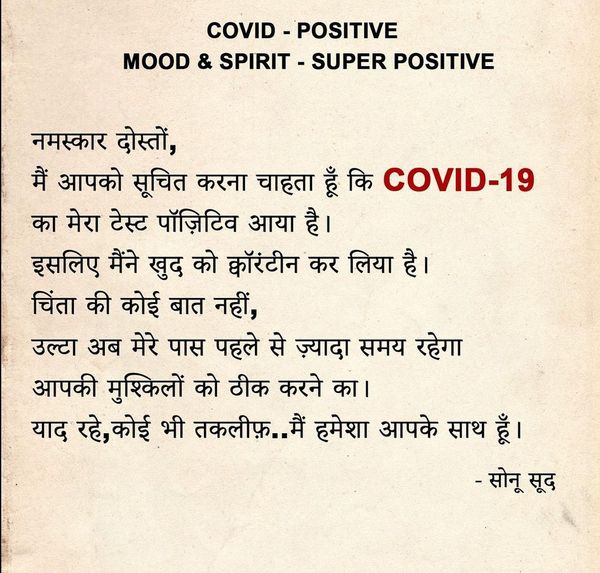 A day ago, he was helpless

Sonu Sood had expressed helplessness a day earlier for not providing beds and medicines for Kovid patients. On Friday, he wrote on social media, “I have not kept my phone since morning. Thousands of calls have been received from all over the country for hospitals, beds, medicines, injections and till now I have not been able to provide this to many of them.” . Feeling helpless. The situation is scary. Please stay home, wear a mask and protect yourself from infection. ” (Read full news)

Apart from Sonu, the Kovid report by famous fashion designer Manish Malhotra has also come positive. Giving information about this, 54-year-old Manish has written on social media, “My Kovid-19 has come test positive. I have immediately separated myself from home quarantine. I follow all the safety protocols, as advised by the doctors. Obeying. Please be safe and take care of yourself. “

Many celebs have been positive

Many celebs have been infected with Corona before Sonu Sood and Manish Malhotra. These include names like Akshay Kumar, Aamir Khan, Govinda, Pawan Kalyan, Ranbir Kapoor, Katrina Kaif, Vicky Kaushal, Rahul Roy, Rohit Sarraf, Sumit Vyas and Ashutosh Rana. Many of these celebs have also been recovered.