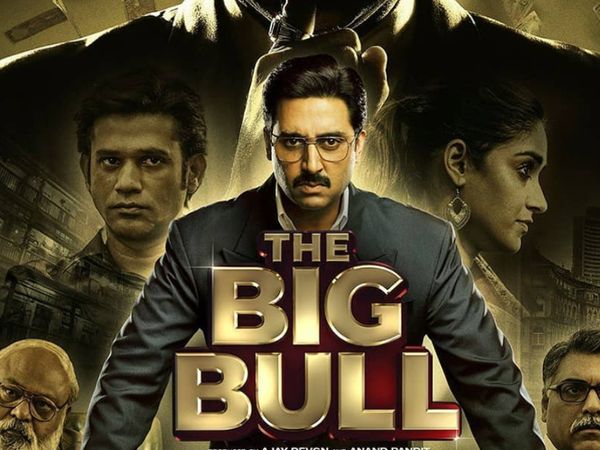 Inspired by the Harshad Mehta episode, ‘The Big Bull’ is the story of the middle class leaping into a class that does not believe in a mere nine to five job. This is the saga of the section that wants to become entrepreneurs. Nobody wants to be a banker, but wants to be a job giver. Harshad Mehta tried to do all this thirty years ago. Today, youth surrounded by unemployment are also being requested to become system job givers. Its characters point to another thing. That is, the biggest strength is not money or power. The center of power is contained in information. He who has the inside news of Artha or political world is omnipotent. The film also brings the then government in the dock.

‘The Big Bull’ is set in the 90s. At that time India’s economic move was taking a big turn. In the same era, the protagonist Hemant Shah (Abhishek Bachchan) living in Chawl takes advantage of the loophole of the erstwhile banking system to become the emperor of the stock market, the film is about that. Abhishek Bachchan has a hold on the characters. We have seen that in Guru. Here, he has presented the thinking, decisions, restlessness, ambitions of Hemant Shah in a seductive manner. In ‘Guru’, he kept Gurukant Desai aggressive and to some extent loud. But he has kept Hemant Shah calm and restrained on the top. Soham Shah, who became Hemant’s brother Viren, also has a gravity in the character’s character. He has captured the voice of that character. Saurabh Shukla plays Mannu Bhai, the antagonist of Hemant. Saurabh could not produce the same effect as ‘Jolly LLB’ Judge Tripathi. Here his character seems to be downplayed.

Ileana D’Cruz, journalist Meera Rao, Nikita Dutta in the role of Hemant’s wife and the rest of the co-star have failed to leave a big impact. That is because the accent, body language of the states from which his characters belong, were not kept here. This may not have been kept by the makers, as they had to cater to the film Pan India Audience. The songs are decent by situation. Carrie Minati’s ‘The Big Bull’ is fine. Kunwar Juneja wrote Ishq Namaja is very popular. The 90s ambience in the film is reflected in the production value.

Director Kuki Gulati has written the story and screenplay together with Arjun Dhawan. The dialogue is commanded by Ritesh Shah. Kuki, Arjun and Ritesh have also tried to put together an Inheritance question. That is, the system does not want the middle class to hold the key to getting rich in short-cut ways, while the politicians and the big business houses have been making crores inside their pockets in the same manner for years. Kuki, Arjun, Ritesh all three ask that if the middle class wants to adopt a short cut and succeed in it, is it a crime? Why are there loop loops where even the bubble starts to feel like having economic power? ‘The Big Bull’ is a concerted effort that the system and society look inside themselves and find answers to such questions.

Irrfan Khan admitted to the hospital, spokesperson gives an update about...