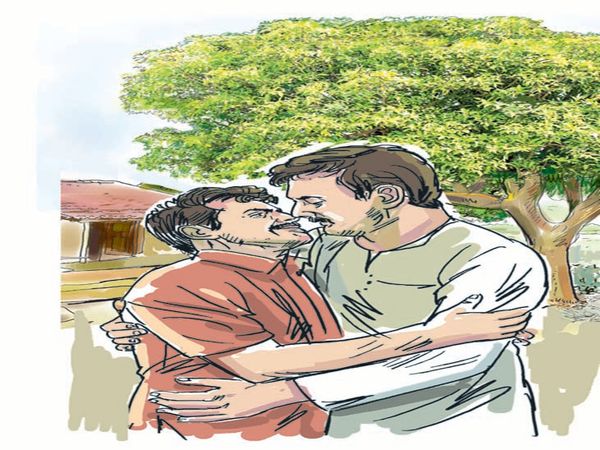 On a hot summer day, from the scorching heat of the sun, to the yellow-wilted-gray skies, the smells of mogre, juhi, ratrani, of glorious nights and of mangoes, watermelons, melons. Mango has been my favorite fruit since childhood. I still eat, but now I feel sour. I blocked Madhav’s phone from yesterday. When the wife came to say something, she kept her eyes silent. But when there is constant noise in the inner being, how to silence it? He is not afraid to show his eye, nor is he blocked. Madhav, my younger brother. Always he is shorty for me and I am his brother. When I came to know that my younger brother or sister was going to come, then I kept asking for tight, eyes closed younger brother in the prayer meeting of the school everyday. When that happened, in the whole locality, proudly sitting on a small bicycle, ringing the bell, every house came to announce that my younger brother had come. Once a master ji slapped him without talking. I had come to plead with him to ask the reason, when I was not very big in my age. Both of us, brothers together, would eat food in the same plate. Whatever you want to bring, Shorty would get up to take it. Once his friend refused to call me brother and talked to you about me, he had just broken friendship. I would not have been silent until I had heard every single thing of Chhotu School. We had a small garden of mango trees, Amrai. It was our rule to spend some time there everyday. I always had a lot of interest in reading and his sports were in trees, plants etc., although he was also good in reading. When the mango season arrived, it would bring out the best saffron mango variety because it was my favorite. If we eat mangoes, he eats less and feeds more like shabri. They used to say, “Brother eat this one, it is sweeter.” Eat this smell of it is so good. ”I would have said that you would eat it,“ You eat mango with so much rum that you enjoy watching it. ”Ah, so many memories and so much trouble. Amrai also became the cause of trouble. First went to Babuji, then mother. Both our brothers had settled in their lives by then. All land and property were divided equally between us, except Amrai. Mother kept looking after Amrai till the last time. Whatever mangoes always came, donations were first made in temples for manorath. Then all the relatives and neighbors of Nanihal-Dadihal. If anything else was left in the house, they would have sold Amrai’s year-long expenses. Amrai was given to Chhotu when she was leaving her mother. When Chhotu came to deliver mango boxes in the summer, I was so angry that I told him, “He is a very big businessman, has come to give mangoes in alms”. His tears started flowing. He started saying, ‘Brother, the mother said that Raghav carries the burden of work. Anyway, he is not fond of farming. You should handle Amrai and sell as much mangoes as you can to extract expenses, etc. Keep the rest of the system as before. Even today, I have brought saffron for you. ”When my own wickedness is seen with my own eyes, then my own heart is shattered. I said very brutally, “Mother had asked you to handle, you grabbed me.” He went away crying without saying. I would have met both our brothers in a social event too, so I turned my back. Explainers explain, instigators provoke. Every year the boxes of mangoes kept coming from the village and I kept sending back. Today, thinking of being neutral, the truth is hurting like a whip. I do not know why it is so that people will donate to show it in the world, spend it, but if their real brother takes even more than half a meter of land, then he will make a case. My truth was that my ego was hurt that the younger loved the mother more, she was considered more capable. I had forgotten that the mother had arranged for me both common and comfort. Today the dust of whirlwinds roaming in the mind was also burning the eyes. After wiping his eyes and raising his head, Chhotu was standing in front. I hugged and hugged. He was shocked. Then said, “Brother, I have brought Amrai’s papers, you keep it.” Give me back my younger brother’s authority and love. I do not want to go out of the world regretting that my elder brother has been angry with me for a lifetime. ”I said with a slight smirk on his cheek,“ First I will die, I am great. Woke up