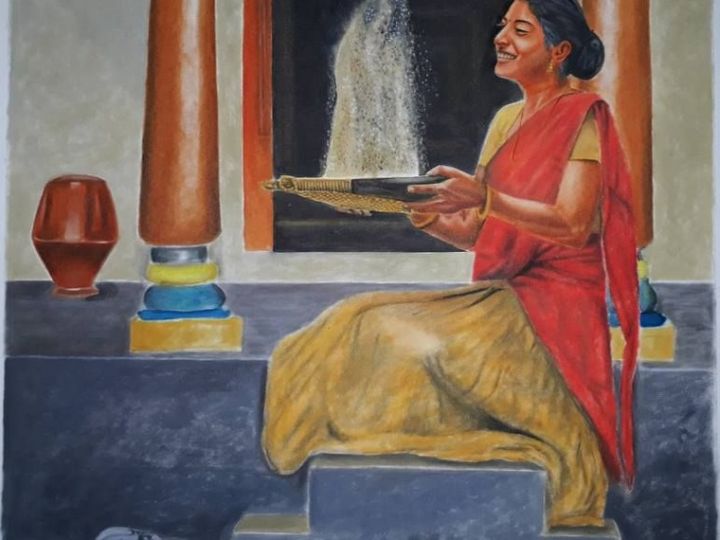 All the chowkidarin mai in the village called him. It was heard that the Nawab there appointed her husband as the watchman of his area. Long mustache, huge height, stocky body, strong face. When you would sit on a horse, the spirit of thieves and bandits would tremble. Now he has passed for a long time. Chowkidarin Mai was his second wife and about ten years younger.

Medium step, the simplicity of the village dress, thick silver beams in the feet, gaur varna, yellow sandalwood on the forehead, wrinkles knocking old age on the face, silver hair shining on the forehead, But the fervor resembles the young in gait and voice. Overall it was the form of Chowkidarin Mai. Although she was living with sons and daughters-in-law, but she could hardly stay at home.

There was a midwife as well as a nurse for a treasure house. She was also an expert on understanding traditions, and was a mother-in-law, friend, and trusted assistant to women across the village. Sometimes women used to laugh – My mother, why did God give you all the guns together? What was the enmity with us? ”Mai would laugh and say,“ It was good for me, otherwise it would have been chakraghini. But what he wants, he learns. Human beings are worse than waste paper without qualities. ‘

Ramu’s mother, a resident of the village, died leaving five children. Two brothers and two sisters were younger than him. Dad used to work outside. He himself was studying college with a rented room in a nearby city. Six months ago, the mother stubbornly turned her hands yellow. Now, with the departure of the mother, a family of sorrow was broken on her family.

The responsibility of Griha-Lakshmi fell on his wife Radha and that too at the age of eighteen. The day used to go out in some way, but on the day both of them were not father and son, at night the children started feeling scared. Everyone decided that Chaukidarin Mai agreed to sleep at Dhanna’s house for a few days. When asked by Mai’s son-in-law, he said, “I roam around the village all day anyway.” Stay anywhere, from our problem. ‘

From the next day, Chowkidarin Mai became a part of his family. In the evening, as soon as Mai arrived, the women, children, etc. of the neighborhood would gather. The stories of her husband’s bravery, of the times of dying on each other in the eyes of misfortune, of the big quarrels in the village by the village panchs were being heard from Mai. During the day, Mai did not get free time.

Whenever someone was suffering from pimples or pneumonia, Mai would be called and Mai would get her patient to make a decoction of basil, dry ginger, cloves, pepper and other drugs. The room, utensils, clothes were all kept separately. Used to swing the patient’s room and cot on all four legs. Neem leaves were boiled and the hands and feet of the patient were washed and dusted with the name of God. Chowkidarin Mai would have come fully explained. Occasionally, his care would go on.

Today morning, he sat down in the morning. ‘Mai, come on, today is the daughter’s cow. All the work of jewelry, clothes, Negachar will be done according to you. We have arranged for lapsi, puri and lentils, the rest of you know, your work. ”Back from there, two or three women at home were waiting too late with their infants to get their neck fixed. Were.

Mai temple used to come in the morning. Once a year, a group of sadhvis would come to the temple, there would be discourses for two or three days. Mai used to talk to him for hours. Even in the temple, some woman would be waiting for Mai with some work. On that day Lachma was saying, “Mai kya karoon, now the husband is beating every day.” Mai became red with anger. She said, “Come with me, I treat her.” Lachma’s husband Ratna was shocked after seeing Mai.

She stared directly into Ratna’s eyes and said, “Ratna, if you are twisting your hands and feet, should I tell a young man to fight?” I see how long he fights. You do not feel ashamed while killing this woman of one and a half ribs. If you have a man, then fight with the equal. ”Rutting with a stuttering tongue, I could only say that Mai, she fights my tongue, what should I do?

‘Answer the tongue with the tongue. You will not work, if you stay there all day, then she will say something. ”Suddenly Mai put Ramjhara in the hand of Ratna from the temple,” I swear, Ganga Maiya, will not beat it from the front. ” And from that day on, the problem of Lachma was resolved forever.

Till the time nurse Nai Bai came to the village, Mai had been giving delivery only. But now Mai started to refuse everyone. She used to say, ‘I have neither the means, nor the facilities which are in the hospital.’ It was a coincidence or fate, but all deliveries done by Mai were safe. Many teenagers still chuckle when they get any achievement, after all, whose knee is this? Chowkidarin Mai Ki.

On the occasion of marriage, people would come to pick up Mai ten days in advance. All programs from Vinayak Foundation to Ganesh farewell would have been under the supervision of Chowkidarin Mai. Mai’s job was only to give advice, explain ways, and occasionally give sweet rebuke when she made a mistake.

Mai’s direction used to be in such things as the rhythm of lyrics, lyrics and on which occasion the song is to be sung. Mai’s presence itself was an assurance of the success of the program. Mai would be sent off with the honor at the end of the program. Mai who used to bring her, would divide her son into daughters-in-law. Every Saturday when Ramu would come home, he would go to hear all the stories from Mai. One day he asked, ‘What should Mai bring for you from the city?’

‘Nothing!’ Mai opened the pallu of her lugri and grabbed Ramu, a thick bundle of money. She said, ‘Keep them safe. Earlier I used to give it to sons and daughters-in-law, but I have kept these few rupees for myself. I give it when I ask. ”Radha said,“ Mai, we give you a box and lock key. When you want, take it when you want. ”The money was counted and placed in the box in front of Mai and the key was given to Mai.

Meanwhile, the marriage of Kishna Chaudhary’s daughter from the neighborhood came to a close. So early in the morning he came to take Mai. Said, ‘Mai, from tomorrow you will stay at our house and Ganesha will come back only after farewell.’ Mai would give some answer, before that at the same time Harkha Baba also reached there with his wife. Harkha’s wife said, “Mai, I told you a month ago in the temple.” Tomorrow is the granddaughter’s wedding, so we have to go together. ‘

Kishna said, “I am taking Mai to you.” The tension grew in both. The matter came up with a scuffle. People around them separated them by the way. The panchayat sat in the evening. Panchas said to Chowkidarin Mai, ‘You only tell, where do you want to go tomorrow? At the wedding of Kishna Chaudhary’s daughter or at the wedding of Harkha Baba’s granddaughter? ‘I added with folded hands,’ For me both are equal. For me, the whole village is equal. I will go there as the punches dictate. ”Kishna and Harkha put their respective arguments. There was mutual debate and tension. Piles were uprooted.

In the end, the punches left the decision to Chowkidarin Mai. As soon as dawn, Mai would voluntarily welcome anyone to whose house she would go. But the other side will not tell them anything. Yes, if anyone needs advice, Mai is ready for everyone anywhere.

Fighting like this for Mai is nothing more than foolishness. After the decision of the punches, Mai fell asleep without speaking anything to anyone. Nobody woke up knowing tired. In the morning, Radha saw it, and Mai’s bed was empty. Ramu also found them everywhere, but could not find Mai. Mai’s chest was uncovered inside and the money was not there.

Has she not gone to Harkha, Kishna or her sons-in-law? Everybody curtly asked each other, ‘Where did Mai go?’ Everyone searched, but Mai was nowhere to be found.

By evening, the clouds of confusion had ceased – Mai had left the village. Everyone was calling Kishna and Harkha Baba bad. The weather was humid. Mai was discussed everywhere. That evening, the women did not like to eat and those who ate ate it tastelessly. 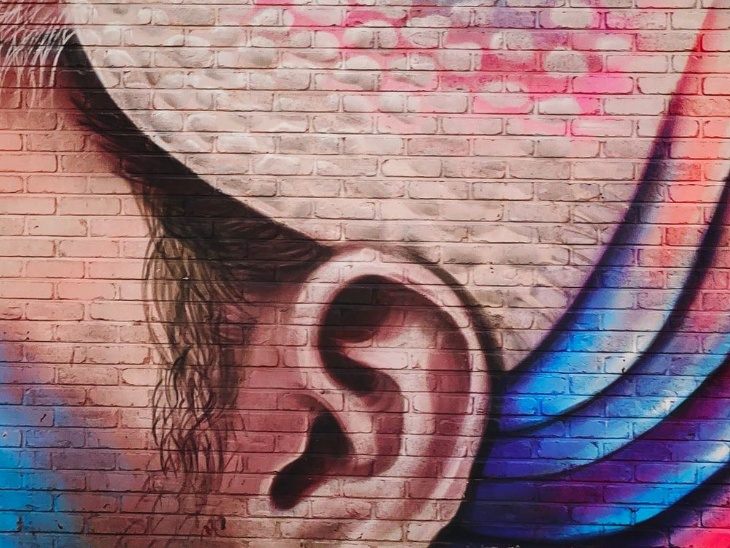 I am ears! Should I tell brother, I am very upset. Previously it was only the glasses but now people also give masks.

Sometimes I am drawn by Master. So sometimes I get caught in a helmet. Fun comes when the children use water to queue in the queue. But when I am pierced by the same woman from seventeen places, what can I tell, brother, I feel very sad.

People say, walls also have ears. How ironic! These humans do chugli, and the ear becomes infamous.

If you sit up and sit, the ear gets pulled. Sometimes even the air which was damaged would be tested. Someone who flares up early will get raw ears. If someone is clever, he will get ears If I am not, then how much a person is deserted. Still never gets respect even by mistake. I am the ear Should I tell brother, I am very upset.